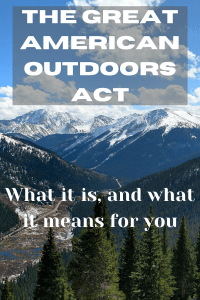 Introduced to Congress by Republican Senator Cory Gardner back in March, the Great American Outdoors Act (or GAOA) has experienced much of the same bipartisan support enjoyed by the Dingell Act. The Senate passed the bill on June 17th with a vote of 73-25, and then the House passed the bill as well on July 22nd, with a vote of 310-107. Now we’re on track for even greater protection of, and more access to, our beautiful public lands.

Update 8/4/2020: President Trump signed the GAOA into law today. I have updated this post to reflect that.

So What’s in the Great American Outdoors Act?

The GAOA focuses on two main concerns — in fact, it’s a combination of two bills that might not have had as much support individually. One part of the bill addresses the estimated $12 billion maintenance backlog plaguing our National Park system. The second part of the bill guarantees permanent funding of the Land and Water Conservation Fund (LWCF). We shouldn’t underestimate the impact of this legislation. Both the NPS and LWCF need this funding, and the result will be a better world for all of us.

How so? Let’s dig deeper.

The GAOA and the LWCF

Congress established the Land and Water Conservation Fund in 1965. It was important public lands legislation — the LWCF  dispenses funds and provides matching grants to federal, state, and local governments in order for them to acquire lands and waterways, or to create easements on land and water. In short, the LWCF can be used to create greater access too public lands. These funds have been used to create recreation areas, maintain the wilderness character of National Parks like Yellowstone, and have helped state governments and communities purchase almost seven million acres of land and easements for accessing public lands.

Last year, the Dingell Act permanently reauthorized the LWCF. It did not, however, guarantee funding. In the past, LWCF funds came from royalties and fees from offshore gas and drilling interests in federal water. Unfortunately, much of this money has often been diverted to other purposes instead of funding efforts to conserve and protect federal lands and waters, or providing access for outdoor recreation

The Great American Outdoors Act solves this problem by permanently supporting the LWCF at the maximum amount of $900 million annually. Offshore resource extraction will still supply the funds, but the GAOA ensures that those funds will not be diverted. Instead, the LWCF will continue its work of providing grants for acquiring land for conservation and recreation purposes, as well as supporting National Parks, National Forests, Fish and Wildlife, and the Bureau of Land Management — our four primary federal land agencies.

The GAOA and the National Park Maintenance Backlog

In addition to solving the funding problem for the LWCF, the Great American Outdoors Act establishes a National Park and Public Lands Agency Restoration Fund. This will supply $9 billion to address deferred maintenance projects at National Parks, National Forests, Wildlife Refuges, and other federal lands.

The purpose of this is to attack the roughly $12 billion National Park maintenance backlog, with $6.5 billion set aside specifically for the 419 National Park units. As I mentioned in my article America, We Don’t Deserve Our National Parks, our National Park system has become overburdened, and this funding — which will be dispensed over the next five years — is desperately needed.

While National Park visitation has skyrocketed — to the tune of roughly 50% since 1980, the NPS budget hasn’t really grown at all in the same span of time. Hence, the maintenance backlog — roads, trails, and campgrounds in need of repair, fire safety to address, and visitor infrastructure requiring development.

While the majority of of funding will go to the National Park system, other agencies will also reap benefits. This includes the Forest Service, the US Fish and Wildlife Service, the Bureau of Land Management, as well as the Bureau of Indian Education. Each of these agencies have their own maintenance backlogs, and the GAOA will help address them.

The outdoor recreation industry is responsible for 2.5% of America’s gross domestic product — that’s $778 billion, and 5.2 million U.S. jobs. Further, tourists in and around our National Parks spend $21 billion on food, gas, and lodging. That spending leads to over $40 billion total economic output from National Park tourism, supporting over 340,000 jobs annually. The NPS anticipates that the Great American Outdoors Act will create more than 100,000 additional jobs.

As of August 4th, there isn’t any “what now?” left — President Trump signed that bad boy into law. All we’re waiting for now is for the funds to get properly dispersed. That should start in 2021, so expect to see some improvements in our public lands next year.

This is a big win for public lands users — and every American by extension.

So what can we expect from this funding?

“Not later than 90 days after the date of enactment of this section, the Secretary and the Secretary of Agriculture shall submit to the Committees on Energy and Natural Resources and Appropriations of the Senate and the Committees on Natural Resources and Appropriations of the House of Representatives a list of projects to be funded for fiscal year 2021 that—

“(2) as of the date of the submission of the list, are ready to be implemented.”

In other words, in a few months we should have a list of projects that will start addressing the National Park maintenance backlog. The LWCF already has a list of proposed projects for 2021 that still require funding. If you want to know more about these proposed projects, check out this interactive map, which makes it easy to see what the Land and Water Conservation Fund would like to accomplish in the coming year.

In my own neck of the woods, the funding could be used “to secure access to lands that in turn will improve access to more than 500 acres of adjacent forest-owned lands used for viewing and hunting of big game animals, angling in nearby streams, dispersed camping, hiking, photography, biking, and motorized trail use.” All of those listed recreational activities bring money into the state and local economies. Meaning that even if a South Dakotan never sets foot on any of that land, they still stand to benefit.

To be clear, this doesn’t solve all the problems facing our public lands. Despite signing the Dingell Act into law and now the GAOA as well, President Trump hasn’t been the most public lands friendly president — the Tongass National Forest, Boundary Waters Wilderness, the Northeast Canyons, Seamounts, Bears Ears and Grand Staircase Escalante National Monuments, and the Arctic national wildlife refuge have all been targeted under the Trump Administration for fossil fuel extraction and commercial exploitation — despite the fact that outdoor recreation in many of these areas could provide similar economic incentives without destroying precious natural and cultural resources.

But today, I’m happy. The fact that the GAOA isn’t a magic bullet that will resolve all the challenges facing public lands doesn’t detract from what it does offer. To sum it all up, the Great American Outdoors Act will provide permanent funding for the LWCF, help address the National Park system maintenance backlog, contribute to outdoor recreation and tourism spending, and potentially create over 100,000 new jobs. In other words, the GAOA will protect our public lands, improve our National Parks, and bolster the American economy.

You can read the full text of the Great American Outdoors Act here.