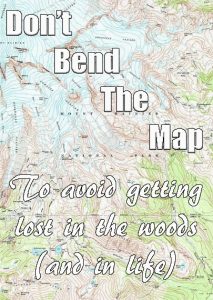 The human brain is amazing, but also weird. Our mush organic computers don’t like uncertainty and randomness. We unconsciously seek out patterns, try to solve puzzles, or otherwise make order out of chaos. All of that is well and good, and can actually be quite helpful in a lot of situations. In others however, it really throws us off. Once we make up our minds about what we see if front of us, our brains don’t like to backtrack, or edit that decision. You see this quite frequently when people get lost in the woods. They look at the map and the world around them, and if these don’t match, they start forcing them to agree. This is called bending the map by search and rescue teams.

I first learned about this pitfall from one of my favorite books, Deep Survival by Laurence Gonzales. As you can imagine, when recreationists bend the map in a wilderness situation it directly affects their safety in the outdoors. They get frustrated and panic when their minds can’t match what they see around them with what they see on the map.

After panic sets in, the brain tries to solve the puzzle; this leads to rationalizing and coming up with conclusions that seem ridiculous, such as:

These are just a few examples, and although they seem silly to those of us at home, in the moment they feel like viable solutions. That’s how our brains work! Some lost hikers have even smashed their compasses because they got so frustrated when the compass didn’t agree with the direction they think they’re headed.

Obviously bending the map is dangerous in the backcountry. Trying to force the map to agree with where you think you are, as opposed to letting it give you useful information, can lead to disaster. Even when it doesn’t, it can be a pain in the ass. When I got off-track in Sand Ridge State Forest several years ago, it was because I bent the map. For me it just meant a longer hike to my site, but in other circumstances it can be life-threatening.

Since that experience, I’ve tried very hard to avoid bending the map. Not that it doesn’t happen — I’ve never been the best at navigation, and I don’t construct very good mental maps. But now I’m self-aware enough to question myself when it comes to the direction I’m headed.

The thing is, it isn’t just hikers in the backcountry who bend the map. We all do it, and more frequently than we expect. In the world of decision-making, it’s called confirmation bias. We decide that things are a certain way, and our brains either ignore evidence that suggests otherwise, or find a way to interpret that evidence to support our conclusions.

Analysts, financial advisers, and investors all bent the map in the early-2000’s, which led to the nationwide financial crisis in the late-2000’s. They didn’t exactly ignore the evidence that suggested selling too many mortgages in order to meet demand for mortgage-backed securities would end poorly. Their brains just made that information fit into the narrative they had already chosen — that they had found the goose that laid golden eggs. They simply couldn’t wrap their heads around the evidence that suggested it was all going to collapse.

Until it did. Contributing to a national recession that still affects many people to this day. Those investors weren’t stupid. They just got fixated on one outcome — making butt-loads of money — which led their brains to dispel contradictory information that should have helped them make wider decisions.

Just like investors and hikers, we all need to be wary of bending the map. Think about it. We tend to overeat when we exercise because we feel like we’ve earned it. Or we’ll use metrics that don’t really matter to measure business success — like the number of social media followers we have — instead of how much revenue we’ve generated.

How We Can Avoid Bending the Map

How are you bending the map in your life? Take a few moments to think about how you might be letting your brain lead you astray. Do you have any areas where you might suffer from confirmation bias?

Luckily, we can learn to avoid bending the map.

First things first, whether you’re navigating in the wilderness or making financial decisions, disengage your mental autopilot. You should absolutely think actively, not passively. Open your mind to input of all kinds, even if it seems to disagree with what you believe.

Some skepticism is healthy; it’s okay to spend a little time questioning your own assumptions. I’m a firm believer in trusting your gut, but you have to pair your intuition with viable information. Ask what your gut-feelings are telling you — do they agree with the assumptions you’ve made about your situation? If not, slow down and think about your course of action. Use your brain and your gut to help you figure things out instead of letting them steer the ship. Autopilot is awesome for washing dishes but pretty lousy for decision-making.

And when you find yourself lost in the woods, don’t panic. Remember, your compass DOES point North and maps don’t lie. We simply misinterpret them at times.