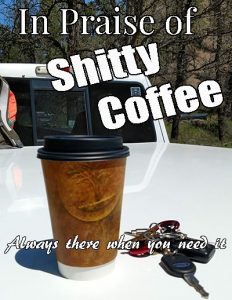 Since my first sip, I’ve probably drank hundreds of cups of coffee. Maybe thousands. Some expensive, some cheap, and some even free. I’ve had lattes deliciously crafted by artisans, and shitty coffee thrown together haphazardly.

I, like most Americans have a bit of a love affair with the stuff. I actually probably border very closely to addiction when it comes to caffeine in general, not just coffee — should you dig through my recycling bin, you’ll find an assortment of Red-Bull cans scattered among everything else.

Coffee is a different animal

It’s cheap. Plentiful. Hot. It’s a damn American institution. I’m not talking about expensive cappuccinos from Starbucks, or the delicious lattes from the local coffee house. Don’t get me wrong, I love local coffee, and proudly support the baristas that do such a great job supplying me with caffeine in a delicious package.

But this post is an ode to shitty coffee

I’m talking about the coffee from a gas station at 3am because you still have a long drive ahead of you, a term paper due the next morning, or a monster to fight. A cup of coffee at some diner that time forgot — with a salty waitress and even saltier food — that looked like a great spot to stop and cure your hunger pains. Cheap instant coffee made on a backpacking stove after you drag yourself out of a warm sleeping bag. The coffee from a vending machine at a hospital while you pace around the waiting room. Shitty coffee is a good friend.

I started drinking coffee in high school. A local coffee shop had opened up in town and I started going to open poetry nights with my friend Sean. At the time I thought I would make my living as a writer. Yes, I thought I would bring home significant money as a poet — my goals haven’t always been grounded in reality. No thoughts of writing about outdoor recreation and microadventure entered my mind, and I sure as hell would never have pictured myself writing freelance advertising copy. Some things change. My writing style certainly has evolved. So too has my consumption of coffee.

In my teens and early twenties, I really only liked coffee with a lot of cream and tons of sugar. Decidedly unmanly. When I started hanging out until dawn at Steak and Shake with my friends Nathan and Sparky, talking about road trips we’d never been on and all the other odds and ends that come with midwestern living, I made the choice to start drinking my coffee black. You know, because that seemed like what beatniks in the early 50s would do, and I was still riding that weird identity.  I didn’t like it at first, but I’ve come to love it.

Nathan and I, along with other friends, would eventually make a habit of driving to St. Louis in the wee hours just to go to this one coffee shop. At the time, it was probably the trendiest place I had ever been. We would slam espressos, because of course we drank it like we were taking shots. Then we might order something else, try to talk to girls, and then drive back as the sun rose and we would slink off to work or school. All-nighters were significantly easier in my early 20s.

Perhaps the ultimate cup of coffee that I’ve ever had was on a camping trip in Southern Illinois. I had conducted research for a pet project of mine, tracking down oral histories and trying to get my hands on bits and pieces of evidence that would help me figure out what to do next. One of the hillbillies — and I use the term lovingly — whose grandmother I had interviewed, felt responsible for ensuring that I got off to a good start the following morning. So as the sun rose in my campsite, I stepped out to see him with a percolator over coals in my fire pit.

He poured and handed me a blue enamelware mug — you know the kind. Every camp store sells them by the hundreds.

The best shitty coffee you can get

To this day, campfire coffee is probably my favorite coffee. Full of grounds and ash, because no one ever has the patience to wait for the flames to burn down to coals before putting the percolator on. Always either a little weak, or far too strong, with hints of wood smoke in the flavor. Yet I have found no better way to get started on a cold morning in the field. Campfire coffee made with a percolator is probably the ultimate in shitty coffee. It’s also always universally appreciated.

Instant coffee doesn’t have the universal love of percolated coffee, but it’s a lot easier to pack into a backpack. Sure it almost always has a burnt chemical flavor to it, but there’s something refreshing about that. Nowadays you can find all kinds of fancy instant coffee on the store shelves, but don’t let it fool you — buy that pack of 20 vials for 99 cents. It’ll keep you moving.

Look, we have this notion now that we absolutely must have the best possible option. The most expensive phone, the lightest tent, the fanciest beer, and the finest coffee. We should only watch intellectual cinema, read edifying literature, eat wholesome food, and listen to meaningful music. Dollar margaritas, fart jokes, and five dollar pizzas be damned!

I’m happy to inform you that this is all bullshit. Don’t get me wrong, there is absolutely nothing wrong with enjoying the finer things in life. But it’s okay to enjoy crap too. And if you tell me that you don’t love some kind of crap, I’m calling you a liar. I mean come on. No cheap beer? Boxed wine? Fast food? B-movies? Stupid pop music? Torrid romance novels? Shitty coffee? This is a judgment free zone y’all. It’s okay to love something, even if it’s bad. I didn’t always know that, but I’ve learned the error of my ways.

There’s nothing wrong with loving bad stuff. I love the movie Batman and Robin. It’s absolutely terrible, but I love it. And that’s just fine.

Look, I love latte art. Anytime a barista makes one of those amazing leaves or other foam illustrations I go full hipster and take a picture. I have no shame or embarrassment. I’m not here to talk shit about fancy coffee. It’s good, we all know it’s good. It needs no defenders.

But shitty coffee has always been there for me when I needed it. In the pre-sunrise hours as I hurriedly tried to finish a historiography of comic books in America. When I needed to keep my eyes open to finish a long drive home. As I paced around a hospital, not wanting to hear news that I knew was coming. Or even during a sunrise at Horseshoe Bend that required waking up at 3:30 am.

High quality fancy coffee wasn’t there for me any of those times. Shitty coffee always had my back, and I’m grateful for it. So sure, you’ll see me at the coffee shop, drinking my fancy lattes and espresso double shots. I love them and they’re amazing. But shitty coffee is an old friend who I’ll never turn my back on. Because it’s hot, delicious, and always there when you need it.

Epilogue: The coffee that should have been shitty, but wasn’t

The best coffee I’ve ever had came from an unassuming coffee vending machine in the basement of Booth Library at Eastern Illinois University. Just around the corner from the microfilm readers, a young history student like myself was perfectly placed to get that caffeine fix. The thing is, it shouldn’t have been that good. No vending machine coffee ever is. That coffee should have been shitty, and yet it was delicious. Every single time.

There’s only one explanation. Magic.

3 thoughts on “In Praise of Shitty Coffee: Always There When We Need It”