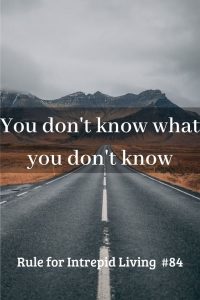 I worked at a chain music store while I was in college. All in all, not a bad job for someone in their late teens and early twenties. My employment there lasted about six years in total, and in that time I saw plenty of staff come and go. Some were great, most were okay, and a few were just trouble waiting to happen.

That’s what Ryan was.

That’s not to say he was a bad worker. In fact, he’d do most anything that you would ask him to. Sometimes he did it quite well. But Ryan had one big flaw. You see, he had an extremely high opinion of himself. Too high. He was just certain that he had everything figured out — that he knew everything he needed to know.

One day he was supposed to clean the bathrooms. No big deal, I told him where the cleaning supplies were and what to use to mop the floor. He didn’t really listen, and I didn’t think too much of it. It’s an employees only bathroom at a small, Midwestern mall. Not exactly rocket science.

Half an hour later he came back to the front. We went about the important business of CD sales, but he kept complaining about his eyes hurting. Then he started to cough. I sat him down and gave him some water. “Ryan,” I asked him, “what did you use to clean the bathroom.”

Unabashedly, he told me he used an ammonia mopping solution, and then poured bleach on the floor. He knew that these two chemicals could get things clean. What he didn’t know was that if you combine ammonia and bleach, you don’t just get clean floors, you get chlorine gas. In small doses, it causes eye and skin irritation, difficulty breathing, and a nasty cough. In large doses, it kills.

Ryan called his girlfriend to take him home. I suggested they go to the hospital, but I don’t know if they ever did. I didn’t see him for almost two weeks, and afterward he laughed it off. But I noticed that he didn’t have quite as much swagger upon his return.

Hell, I only knew about Chlorine Gas because I was a history student and had recently read about its use in WWI. If I hadn’t been a nerd, Ryan might have died.

Most of us won’t accidentally poison ourselves with Chlorine Gas, although incidents and deaths still occur because of this very accident, but we all fall victim to the same danger that Ryan did — we don’t know what we don’t know.

I shouldn’t be too hard on my former coworker — I had a pretty big head in my early twenties too. And just like Ryan, it almost got me killed. I used to lifeguard at Scout camps in Indiana, and taught scouts all about swimming, canoeing, and rowing too. I felt incredibly confident in the water. Too confident, in fact.

One day while driving through Illinois to get to a camp after a storm, I came to a flooded bridge with a car stuck halfway across. The water was rushing over the bridge, but I thought I could see a person in the driver’s seat. So I did what I thought was the right thing — I roped off with a bowline knot, anchored the rope to my car, and started out across the bridge with water pushing against me up to my knees.

This was extremely stupid. I just wouldn’t learn that for about another decade. The mechanics of flowing water combined with rope will push a person downstream, and then hold them underwater. Had I slipped, there would probably have been nothing I could have done. I would have been better off with no rope at all. I was overconfident and under-competent. I didn’t know what I didn’t know.

You don’t know what you don’t know either. That’s not personal flaw — it’s part of being human. Luckily, there are things you can do about it.

The first is to learn as much as possible. About everything and anything. Because you never know what context that knowledge will add to your life. A dude that I worked with 15 years ago was spared serious illness — potentially even death — because I was in a particular history class. Knowledge truly is power, and we should accumulate as much as we can.

Do the best you can

But we do the best we can with what we do know. We learn new skills, acquire new knowledge, and prepare as much as possible. Because while we can’t know what we don’t know, we can be aware that we don’t know it all, and take steps to learn more. At the end of the day — or the end of our lives, in fact — we’ll never completely close the gaps in our knowledge. It simply isn’t possible. By committing to a lifetime of learning however, we also commit to a lifetime of closing that gap as much as we can. It’s not perfect, but nothing ever is.

I’m writing this at a time of uncertainty. The COVID-19 Pandemic has a lot of us questioning what we’re doing, where we’re headed, and what we can do moving forward. I’d love to give you some meaningful guidance in this troubled time, but just as you don’t know what you don’t know, I don’t either. Most of us are flying blind, and in this situation — as in all things — we can only do our best.

In this uncertain time, take the opportunity to work on closing that knowledge gap. Learn some new skills. Take in new information. Prepare your mind for upcoming challenges and opportunities. You never know what’s coming next.

That’s what makes it an adventure.