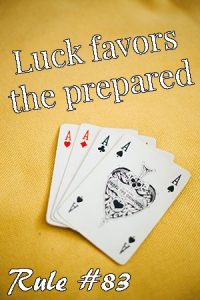 I believe in luck. It doesn’t seem like a very scientific belief — then again, it’s probably not a popular belief with the religious set either. The very idea flies in the face of what we want to be true. We want to know that we’re in control, or that some higher power has the reins. Order, of one kind or another, reassures us. What we don’t like is the notion that some random occurrence — bad luck — can take nearly assured success and squash it into abject failure. The thing is, I think that such things can, and do, happen. That doesn’t mean that we can’t do anything about it — we can always do something to make a situation better. And when it comes down to timing and chance, luck favors the prepared.

Solitaire at the Dining Room Table

Growing up, I saw my parents playing Klondike Solitaire every morning when I got ready for school. I know, solitaire is usually played solo — hence the name — but not in my house. My mom would shuffle the deck, lay out the game, and play while my dad drank his coffee and read the paper. After she played three times, she’d hand the cards off to my dad and he’d play while she surveyed the paper. There’s a scoring system to the game but I don’t remember them keeping any official scores, although they would occasionally keep a tally of wins. They didn’t play to compete. They played to spend time together.

I was a lucky kid

On weekends, when no kids required ferrying to school and no adults needed to go to work, they’d often play for hours. Sometimes they’d talk while playing. Other times they’d play in silence, except for the quiet shuffling of cards. I can remember decks of Bicycle Playing Cards worn nearly to a softened crease in the middle, the result of hundreds of shuffles and cuts, before mom or dad eventually threw them out. One time I walked into the kitchen as my dad was about to toss the old deck in the trash and he said, “Look Bub,” before tearing the deck clean in half on that crease. I was suitably impressed as children usually are when their father does something seemingly herculean.

As I got a little older, my parents eventually taught me to play the game. Of course, I didn’t have much patience at the time for the way they played — turning three cards at a time and only passing through the deck three times if they didn’t play a card. But as an adult, I’ve come to appreciate the game more. When I take solo trips, I often pack a deck of cards and play beside a fire or in the tent before turning in for the night. When Clarissa travels, I’ll occasionally play a few rounds at night while Inkling snoozes on the couch. I don’t keep score either.

What does this have to do with luck?

In Klondike Solitaire, only about 82% of dealt games can be won. The likelihood of winning decreases as soon as you start playing, simply because you can’t know what cards are where. Playing any card may lead to a win, but it could also ensure a loss. Because of this, it’s estimated that exceptionally skilled players will only win about 43% of the time.

That means it’s likely that a player will lose at least 57% of the time. But even if a player uses a successful strategy — and there are strategies for the game — and played every card perfectly, they would still lose 18% of games played. In other words, you can do everything perfectly and still lose.

And it doesn’t only apply to Solitaire. It applies to everything in life.

We walk through life surrounded by random occurrences and confluences of events. Sometimes these align to benefit us — that’s good luck. Other times, they align in a detrimental way. That’s bad luck.

We control everything that we can. We educate and train ourselves, invest in safety gear and equipment, and prepare for every foreseen eventuality. But sometimes life throws us curve balls. Not because it’s working against us — natural law is truly neutral — but simply because the system we live in is so complex that no one is capable of figuring out the probability of everything. If we could, we would be gods.

We can prepare as much as we like — and we absolutely should — but we can’t prepare for everything, and nothing ever goes exactly as planned. Sometimes accidents just happen. Then again, sometimes we find a $20 in the street. Sometimes it just comes down to luck.

Of course, what we do and how we do it matters. Accidents and random events are going to happen — I had an accident not too long ago myself. But when chance deals the cards, whether it’s a good hand or a bad hand, the prepared know how to make the most of it. The prepared have the skills, knowledge, and experience to capitalize on good luck. Likewise, they maintain a positive attitude, keep their cool, and improvise to counter bad luck as best as they can. Regardless of whether chance initially works for or against you, luck favors the prepared.

No matter the odds, the only way to know if a game of Klondike Solitaire is winnable is to play it. The same is true in the game of life. Winning or losing may come down to luck, but the only way to find out is to play. Luck is a factor in the game of life, but it isn’t the only one. Luck favors the prepared — whether you’re in a winning or losing situation may at times come down to random chance, but what you do in that situation is always up to you.

Just because someone does things differently, doesn't mean they do them wrong.

You can save yourself a lot of strife if you don't confuse a description for a prescription.

Today is a crazy busy day. Getting a bit stressed. Looking forward to the end of the day beer when I get home.

Because I'm not actually an action hero, I'm a real like human, and the human operating system is still hella buggy.

All I can do, is summon up every fiber of my being and use it to scream at my own brain to grab the to-do list and Just. Do. One. Thing.