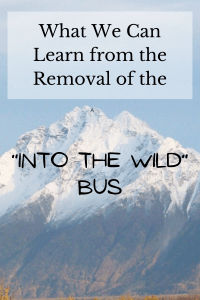 On Thursday, June 18th the Alaska Army National Guard removed the abandoned bus where Christopher McCandless died from the Stampede Trail, in coordination with the Alaska Department of Natural Resources.

Since Jon Krakauer’s book, Into the Wild, detailed the life of McCandless, and his ultimate demise in the bus, it has become something of sacred site for those who feel an affinity for McCandless. So much so that visitors regularly need rescued from the same conditions that made the bus dangerous for the subject of Krakauer’s book.

Locals have wanted the bus removed for awhile now, and understandably so. Every rescue risks the lives of Search and Rescue crews, and costs the taxpayers of Denali Borough — where the bus was located. Yet some people on social media are upset. They feel that, as a memorial placed at the bus-site at an unknown time states, “The very basic core of a man’s living spirit is his passion for adventure,” and that the removal of the bus is a disservice to those that place a high value on adventure.

I believe in the high value of adventure. And I think removal of the bus was the right decision to make.

Further, I think that there’s something that we can learn here. About adventure, why it’s important, and — most importantly — why we should come home safe.

Who is Christopher McCandless aka Alexander Supertramp

For those who don’t know, Christopher McCandless was a young man who, after graduating from Emory University in 1990, abandoned his privileged life in a suburb of Washington, and disappeared from the lives of his family and friends. He drained his savings account, donating the money to Oxfam, and began a journey west and north.

In April of 1992, he hitchhiked to Alaska. A man left him at the head of the Stampede Trail, and McCandless began hiking with a .22 caliber rifle, several boxes of rounds, 10 pounds of rice, and a field guide to edible plants. Some days later he happened upon the abandoned bus and took up shelter there.

After three months, he decided to return to civilization, but discovered that the Teklanika River had swollen due to rain and snowmelt, rendering it uncross-able. He returned to the bus and survived for roughly one more month before his death in August 1992. He may have starved to death or unintentionally poisoned himself while trying to survive off wild edibles.

None of this is a spoiler, by the way. McCandless’s story, skillfully crafted by Jon Krakauer in Into the Wild, isn’t about his death. It’s about his life, and what happened during his two year journey.

Why do people feel connected to McCandless

When I read Into the Wild as a teenager, I recognized elements of Christopher McCandless in myself. A desire for adventure, a connection to the land, a certain disconnect with negative aspects of modern consumer culture. I saw a courage and principled conviction that I wished I had.

I also saw a foolhardiness that I’m grateful that I didn’t share, but I can’t deny that I identified with him in some way.

I’m not alone with feeling a certain connection to the subject of the book. There’s a reason that Into the Wild is an international bestseller, translated into 30 languages and published in over 170 different editions and formats. It was required reading in more than one of my college English classes.

When McCandless abandoned society he adopted a new name — Alexander Supertramp — inspired by Welsh writer WH Davies, and reminiscent of the adoption of trail names. For those of us dissatisfied with society, it’s easy to see why an intelligent and sensitive young person may want to reinvent himself. Especially when their ideals fly in the face of the privilege in which they’ve come of age. Who among us hasn’t wanted to turn the page and enter a new chapter in our lives, unburdened with the stories of our past?

There’s an element of conflict inherent in Into the Wild. In fact, the whole narrative is laden with conflict, the likes of which most of us can relate to in some way or another.

In fact, were this a work of fiction, we could easily identify the different types of literary conflict. We see character vs character in McCandless’s interactions with his father and other authority figures, character vs self in his internal struggle between making connections with others and ultimate commitment to his goal, character vs technology with his dismissal of material possessions beyond simple needs, character vs society as McCandless struggled to make his way in a society that he seemed unable to understand and was certainly at odds with, and of course, character against nature. It was this conflict that McCandless ultimately lost in the magic bus off the Stampede Trail in Alaska. We can even see certain hallmarks of character vs the supernatural as he seems to have viewed his own journey through a transcendentalist lens.

These conflicts allows us to see ourselves in the story. But unlike works of fiction, the characters in Into the Wild lived real lives. McCandless died a real death. We can argue that he was foolhardy. That he was arrogant in the risks that he took, and that he undertook a wilderness experience that beyond his capability. But we should also recognize that while we may not feel them as strongly, many of us in the adventure community are subject to the same conflicts he experienced.


The problem with Into the Wild

Jon Krakauer is a strong writer. Fair, balanced, nuanced. It’s clear to see that he didn’t want to paint McCandless in a romanticized light when he wrote Into the Wild. He obviously feels the same affinity for his subject that I — and countless other readers — do. He compares and contrasts the boy’s adventures with his own, but he never put him on a pedestal. Krakauer understood, and indicated as such, that McCandless may have been intelligent and have strong convictions, but he was also deeply troubled.

But perhaps Krakauer was too nuanced, because since its publication in 1996, Into the Wild has led others to the Stampede Trail and the “magic bus” on a kind of adventure pilgrimage. Like me, these individuals surely see some of themselves in McCandless — or perhaps they see something of him in themselves — and are drawn to the spot where he died. In and of itself, this isn’t bad. It’s the fact that they keep ending up in danger doing so.

In 2007 Sean Penn wrote, co-produced, and directed a film adaptation of the book. It’s a good movie. The writing is great, the acting is solid, and Emile Hirsch shines as McCandless. But there’s a problem. Krakauer took great efforts to not romanticize the subject of his biography, and to expose the dangers of such an approach to outdoor adventure. The film isn’t quite as nuanced. Whether intentional or unintentional, the movie does seem to elevate the character, to place him on a pedestal.

Simply put, the film seems to celebrate Alexander Supertramp more than it seems to explain Christopher McCandless. The result? It’s easy to overlook the individual’s flaws and mistakes, and see him as a sympathetic or inspirational character rather than a real life tragedy. Again, it’s a good movie… but not as great of a cautionary tale as the book that inspired it.


What we should learn from McCandless

While some disagree, I tend to side with Jon Krakauer — I think that McCandless was neither stupid nor unskilled. He survived for 113 days in the Alaskan wilderness. Not an easy feat for most folks.

He was, however, under-prepared. He didn’t have the best information and he didn’t know what he didn’t know. This can happen to anybody — we’ve all found ourselves in over our heads at some point in our lives. Most of the time we can walk away from our mistakes. McCandless couldn’t. He pushed things too far, and he lost his life because of it.

The two deadliest mistakes made by McCandless in my opinion, were his refusal to accept help and his unwillingness to file a flight plan. Had he accepted the many offers of assistance, or simply let someone know where he was and a time to expect to hear from him, he might still be alive today.

Some will argue that accepting the help or letting someone know where he would be flies in the face of what he was trying to do. Maybe that’s true. But maybe sticking to such a narrowly defined path is a mistake in and of itself. Regardless, you don’t have to make the same errors. You can look at McCandless, identify with him, and even aspire to his level of conviction, just don’t idolize him.

Don’t try to be Christopher McCandless. Work on being yourself.

Alaska’s removal of the Into the Wild bus

For those lamenting the removal of the magic bus, remember that the citizens and officials of the Denali borough have grown tired of rescuing travelers. Or worse, recovering their bodies. These visitors are committing the same mistakes as McCandless. Worse yet, they’ve taken what was his search for enlightenment, and transformed it into a tourist attraction. And they’ve risked their lives to do so.

It’s unclear what will happen to the bus now. Maybe it will be moved somewhere safe and established as a memorial. Or maybe it will be destroyed. In the end, it doesn’t matter. What we should take from McCandless isn’t a connection to an abandoned bus or his foolhardy approach to wilderness adventure, but rather a connection to the spirit of place, a desire to live and adventure boldly, and the conviction that we don’t have to live a certain way because society expects it.

In other words, find your own magic bus — whatever it might be — but don’t die in the process.

For as Peter Pan says, “To live will be an awfully big adventure.”

2 thoughts on “Out of the Wild: What We Can Learn from Alaska’s Removal of the “Into the Wild” Bus”