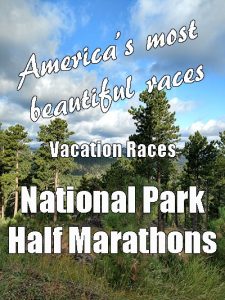 I’m not really a great runner. I’m not remarkably fast, and you won’t see me flying by others on a course. Often, I just find a steady pace and plod along. Admittedly, that pace often remains quite slow. I’m not competitive by nature so when I run, I just want to put one foot in front of the other. And I suppose there’s nothing wrong with that. After all, it’s okay to enjoy something without being the best at it, and that includes races. As far as the simple act of running (or admittedly, sometimes walking quickly) goes, I’ve found no finer race experience than the National Park Half Marathons put on by Vacation Races. That’s not only true of slow runners like myself — those of you who run quickly and love competition will love them too.

Looking for your next running event? Want to find yourself in some of the nation’s most beautiful areas? You should definitely consider one of these National Park Half Marathons. Still on the fence? Here are a few things you’ll want to know!

National Park Half Marathons aren’t in the parks themselves

This may seem counter-intuitive, but none of the races are within the actual parks. They are typically held on public lands near or adjacent to the National Parks. Why? I had a few ides about why this was the case, but instead of speculating, I just reached out to Vacation Races. Kaelee from customer service got back to me pretty quickly, and here’s what she had to say;

First and foremost, having a few thousand runners running in the park would be very impactful to the park and not in a good way. We don’t want that for our parks. Besides that, the logistics would be very difficult as well. Second, we find that holding the races just outside the park, getting as close as we can and providing views of the beautiful area, and then encouraging our runners to head into the park, has a positive impact on not only the park but the economy of the small towns near the courses.

These half marathons are all cup-free

Don’t expect to run up to a water station and get a paper cup of water, because you won’t find any here. Instead, racers use a specialized hydrapouch to get their fill of water or electrolyte drink. I’m not going to lie, it seemed pretty weird when I ran the Yosemite Half Marathon in 2016. I couldn’t quite get the hang out of drinking from it without wearing some of the water.

Since then, I’ve gotten a lot better at getting the water into my mouth instead of on my shirt, and I love the idea of a cup-free race. After crossing the finish line you can opt to recycle your hydrapouch, or if you plan to run another National Park half Marathon, you can save it to use again.

Don’t want to use the hydrapouch? Feel free to bring your own bottle or hydration system — just nothing that will generate excess trash!

I probably don’t need extra snacks to finish a 13.1 mile race… But I like them anyway. There’s always plenty of fruit, Honey Stinger Energy Gels and Chews, and Gnarly sports drink. The biggest thing is to make sure that the packaging of your snack ends up in the trash.

After the race, every participant gets a box of recovery foods and snacks. There’s always a Honey Stinger Waffle, which I LOVE, as well as assorted treats. It’s a good balance of healthy and tasty, and they encourage you to use these as trail snacks in the nearby National Parks.

There’s plenty of opportunities to explore

Even though these races aren’t officially in the parks, Vacation Races encourages you to pay them a visit, along with neighboring public lands. They do this by  they call Club Hikes and Trifectas. Here’s how they work.

Step 1. Finish the Race.
Step 2. Within 72 hours, complete a Club Hike or all three Trifecta activities , then take a picture that shows your face, medal, bib, and location.
Step 3. Send the photo to Vacation Races.
Step 4. Get bragging rights, and sweet Club Medallions or Trifecta Pins.

I’m not a professional runner, but between running cross country in high school, completing the Bix a few times while in the Quad Cities, and a few shots at obstacles like Spartan Race and Tough Mudder, I’ve seen a fair amount of courses. And while I’ve loved quite a few of them, none have been so beautiful and enjoyable as Vacation Races National Park Half Marathons. I’ve enjoyed getting to know fellow runners, the volunteers have been incredibly friendly, and the scenery… Well, it’s pretty damn amazing.

Thus far I’ve completed the Yosemite, Grand Canyon, and Mount Rushmore Half Marathons. This year, Clarissa and I are running the Grand Teton Half, and we may go ahead and do the Mount Rushmore Half again as well — it’s pretty much in our backyard, after all. Next year? Maybe Yellowstone, or Glacier National Park.

Want to join us?

Run a National Park Half Marathon

You don’t have to be an elite runner. You just have to put one foot in front of the other. That’s not always easy, but it is easier when you get to look out over beautiful scenery and breathe in fresh air. As far as I’m concerned, there are few races that compete with a National Park half Marathon. So sign up and run one.

Maybe we’ll see you out there!