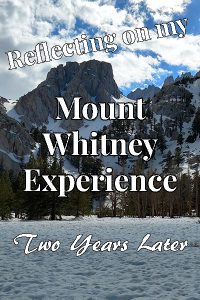 “So you never summited?”

Believe it or not, that’s the reaction I’ve gotten from a lot of people when I share the story of my Mount Whitney experience. I suppose it’s a normal enough reaction — that was my goal when I left for the trip, after all.

But a lot happened in the two days and one night I was on that mountain. I know that sounds dramatic, but the experience had a profound effect on me that still hasn’t diminished. I’m not exaggerating when I say that it changed how I approach outdoor recreation. I think about it every time I head into the woods, and I’m a better outdoorsman because of it.

Now, two years later, I want to reflect on my Mount Whitney Experience.

If you haven’t read my series about my Mount Whitney experience, I recommend checking it out. The series is a long read, but it’s some of the best writing I’ve ever done, and provides significant context for this post.

And yet, we all were.

And we did a lot of things wrong.

We almost walked into a lethal snow-melt waterfall. We could barely figure out where the trail was at times. I barely managed to self-arrest when I fell into an uncontrolled slide down the mountain.

As it turns out, the 10 minutes of training with the ice axe I got at the hands of the outfitter wasn’t enough to ingrain the information in me. I don’t blame the outfitter, I blame myself. The responsibility was mine. I was unprepared.

That unpreparedness seems naive, and perhaps it was… But I also can’t help but feel that a lot of people went up the trail not understanding the conditions. Because if Tim, Jon, and I, with our experience and gear, weren’t able to safely make the trek, what of the hikers with limited experience and no gear? The ones who got a one day permit, and had the expectation that they could summit?

In the end, we did the most important thing right — we looked at the situation and decided to bail. We didn’t do so perfectly, but we made the right call. And that’s much more important than a summit selfie.

I Returned Home with Gratitude

During our stay on the mountain, I found myself feeling an odd mix of conflicted emotions. Exuberance from overcoming dangerous challenges, exhaustion from pushing myself too far, sadness over a lost hiker, and even guilt from enjoying myself as much I did during the experience.

The most surprising emotion that welled up as part of my Mount Whitney experience was gratitude. As my tent mates slept — or tried to anyway — I found myself overwhelmed with gratitude. I was awestruck with it.

A list formed in my head, composed of the things I was grateful for. It started with the immediate — I was thankful that I was safe, full of backpacking meals, and warm in our tent. That we had a fire which I later learned was prohibited.  I overflowed with gratitude for the Black Diamond ice axe that kept me from breaking my legs, or worse — and that by the grace of the gods I managed to stop myself from careening down the slope with it. I was so thankful that we were safe.

But that list expanded into my whole life. My gratitude extended to friends like Tim that had my back and weren’t afraid to bail out when necessary. To my family, my wife, and the sum total of my being. I know how melodramatic that sounds, but I continue to feel that gratitude to this day, even if it’s not always at the forefront of my mind. It has made me a better, safer, more self-aware adventurer.

How Can We Make These Experiences Safer

Not everyone experiences that flood of gratitude, just like not everyone decides to bail out. There isn’t a comprehensive set of stats, but a quick search will show that some people end up needing rescue — and others end up dead. I can’t say whether or not bailing out would have changed anyone’s fate — accidents can and do happen regardless — but so many people all but refuse to bail.

People get incredibly invested in what they’ve planned to do, which I understand. Only 60 people per day get permits for overnight backpacking trips on Whitney; 100 more get permits for day hikes.

Once people “win” the lottery, make the trip, and start up the trail they’ve already invested a lot. They don’t want to turn back. But a lot of those individuals also develop a cavalier attitude about the experience — and why shouldn’t they? People tell stories about heading out in the morning hours, summiting, and getting celebratory beers that night. They think of it as a beginner’s mountain. They got the permit, so how bad could it be?

Ask the hiker whose remains were later recovered 100 meters from where we slept on Mount Whitney.

I understand that Rangers have neither the time or the resources to vet applications for permits — further, I’m not suggesting that we should turn anyone away from wilderness recreation. So how can we make these experiences safer? I don’t have a definitive answer, but I do have two ideas.

The first is that we need to treat adventure as a community. We need to look out for one another out there. And sometimes that means being a Debbie Downer and telling fellow travelers that they’re not prepared for what’s ahead. That’s a very uncomfortable conversation — I’ve been on both ends of it — but it’s much better that the alternative.

The second idea is that we need to eliminate the notion of a beginner’s mountain. There is no such thing. Mount Whitney can — and does — take lives. We have to abandon FOMO and ego, and realize that it’s okay to bail out from our primary objective and just enjoy some time with friends.

When in Doubt, Bail Out

Earlier this year I watched the Academy Award winning documentary Free Solo, in which professional climber Alex Honnold becomes the first person to ever free solo climb El Capitan in Yosemite National Park. He climbed an incredibly complex 3,000 foot monolith alone, unaided, without any ropes or safety equipment. I found myself very pleased when at one point in the film, Honnold makes an attempt only to turn back, bailing out.

He’s a professional who has conquered fear on a level many of us never will. He has accomplished something that no one else ever has before. And he had no problem bailing out when things didn’t feel right. We all need to take a page out of that playbook.

There’s a difference between pushing yourself and putting yourself in harm’s way, between calculated risk and foolishness. It’s hard to see when you’re on that line, especially if you’re inexperienced.

The Value of Experience

I’ll be the Debbie Downer — trying to summit Mount Whitney probably shouldn’t be your first backpacking or mountain experience. Not when snow still covers the mountain in May or June, when the right equipment and — more importantly — the right skills are necessary to stay safe. Head up in July or August and give it a shot, but don’t be afraid to bail then either. Altitude sickness is a real thing. So are fatigue, hypothermia, and dehydration.

I’ll try to head back to the mountain during one of those months. Because I do fully intend to go back and summit Mount Whitney someday. We have history, she and I, and there are just some things I don’t like to leave undone. But when the time comes, it will be on summer days. Even then, if conditions aren’t right, I’ll bail out. Without embarrassment or shame.

And you should too.