After a successful day of hiking and trail riding, we weren’t quite ready to call it quits. The sun was still high in the sky, and we didn’t want to speed back to Rapid City. Instead, we drove back through Custer State Park on the Wildlife Loop Road, as I was eager to see some of the native animal life. We had already paid the entry fee for Custer State Park when we hiked Harney Peak, and the permit is good for seven days, so we were good to go. The Wildlife Loop is about 18 miles long, but don’t plan on a quick drive; the speed limit is 35 mph throughout the park, and you are likely to make several stops. We took about two hours to get through the loop; we had to stop to take Clarissa’s yoga pictures, and we experienced other delays that I’ll detail momentarily. You could get through the loop faster than we did, but why the rush? Take your time and enjoy yourself. It’s worth it.

As I said, I was eager to see some animals, and while we saw one almost immediately, I wouldn’t call him wild.

After that, however, the fauna seemed content to stay out of site for awhile. I spied some prairie dogs and a few hawks, but larger wildlife remained elusive. Incredible views kept me from getting downhearted about the seeming absence of buffalo. 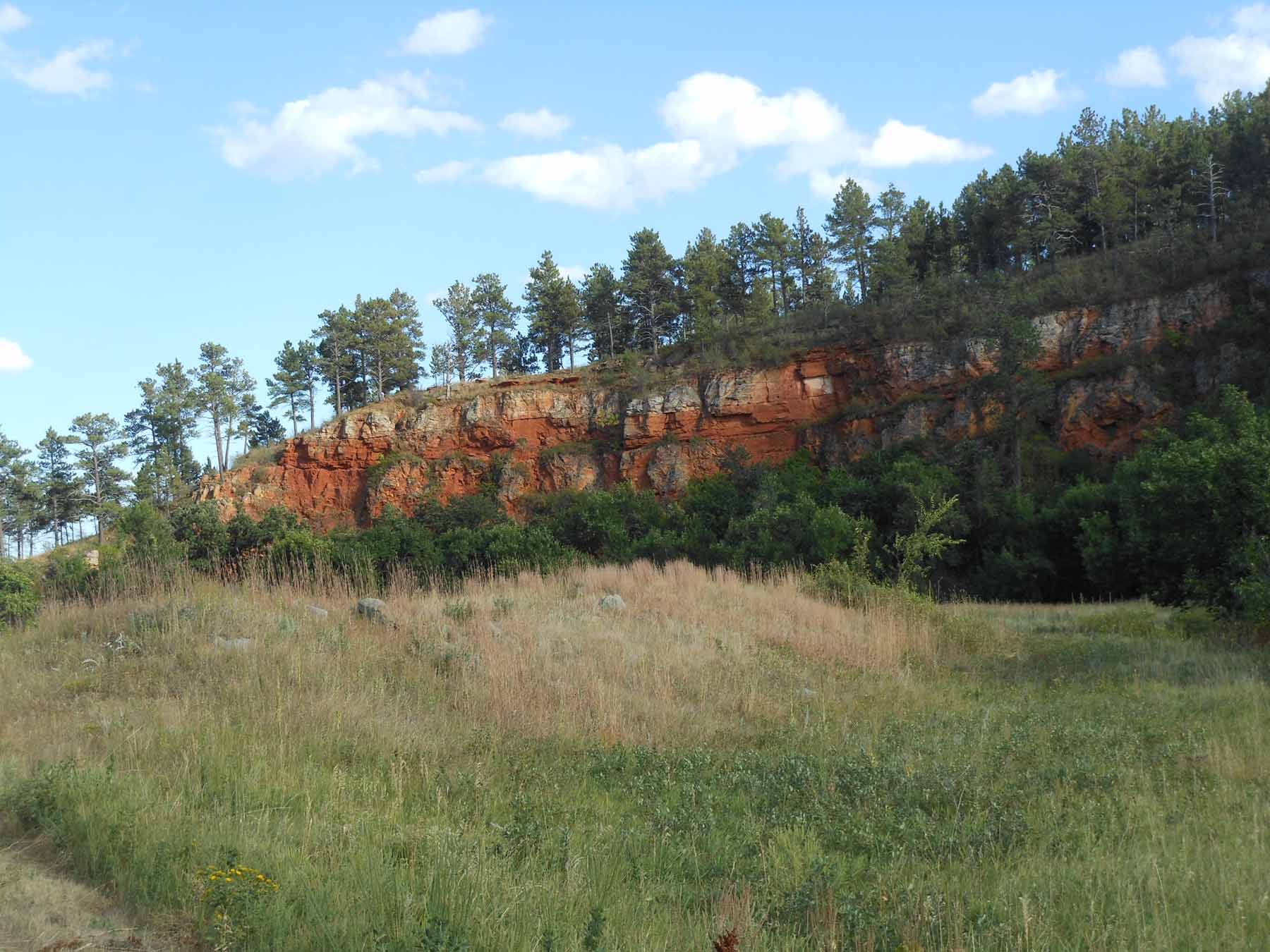 My intoxication with the landscape was a constant theme throughout this trip; despite my travels here, there, and yonder, I’m still quite Midwestern, so the mountains and foothills frequently inspired a sense of awe within me. 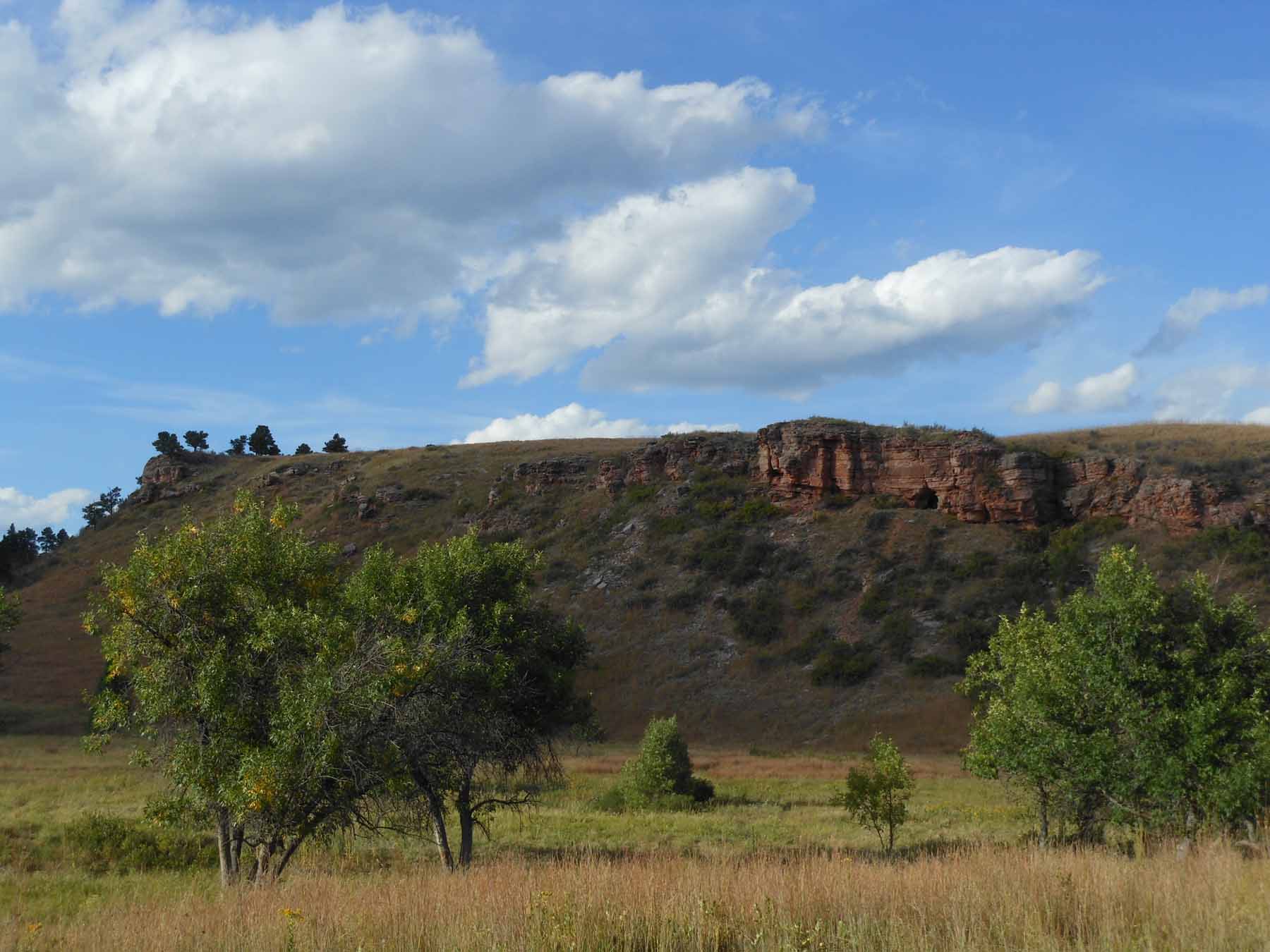 Still, it seemed like the wildlife on the Loop were purposefully avoiding us. Just when I was starting to take it personally, we happened upon backed up traffic, a sign that we were approaching the Begging Burros. 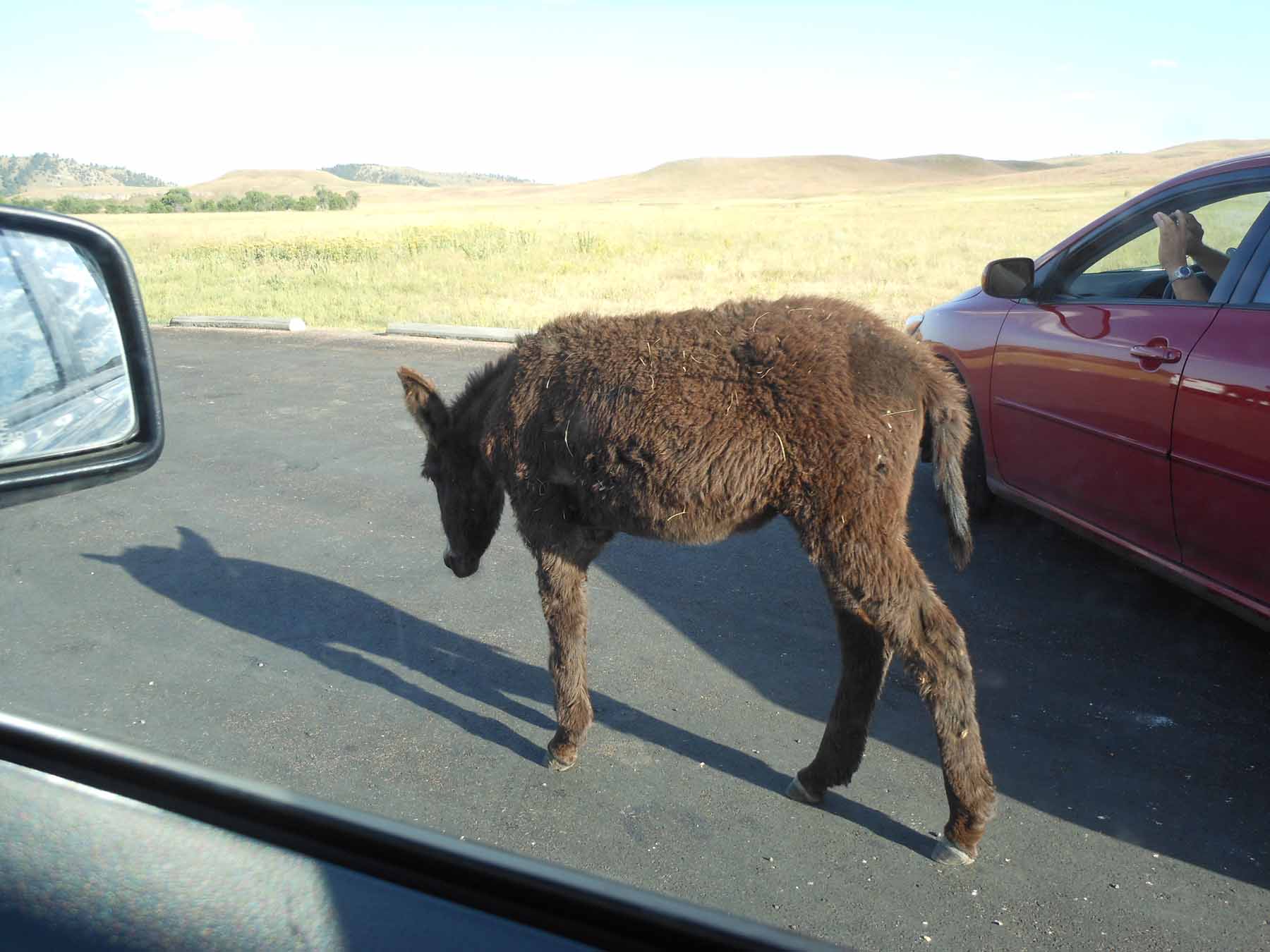 Begging Burros is the name given to the feral donkeys that reside in the park. They’re not native; these are the descendants of the donkeys that used to carry people up Harney Peak. When the park stopped giving these rides, the donkeys were simply released, and now they’re wild. 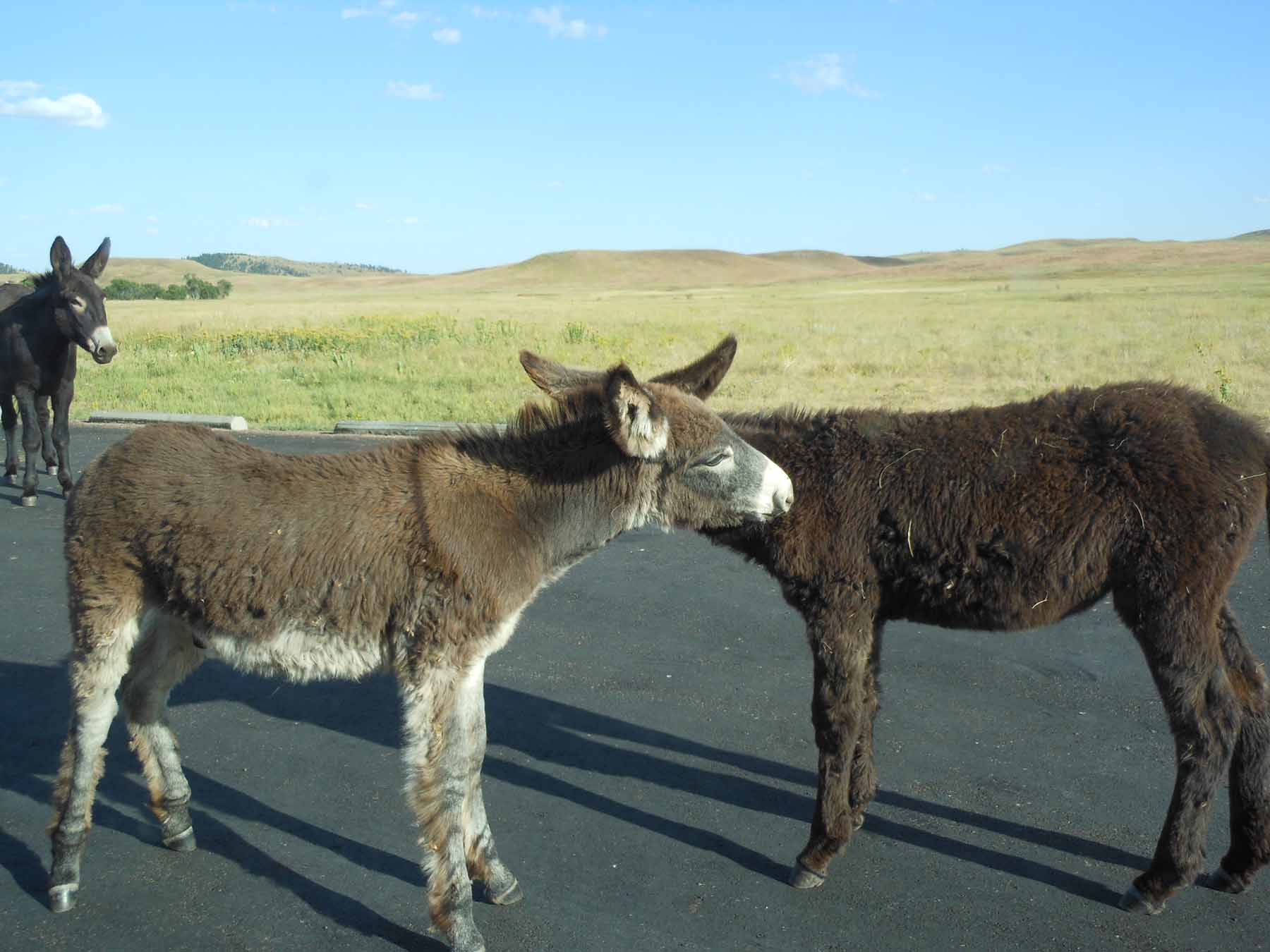 They’re not domesticated, but they are acclimated to people since we humans tend to feed them on our way through the park. We didn’t do that because I try to avoid feeding wildlife. However, I can’t judge those who do too strongly; while it’s technically prohibited to feed any of the park’s wildlife, it has become a bit of an attraction and no one is turning away visitors. The Begging Burrows are a big draw for some people, but not us. While interesting, they failed to really fill me with wonder; I hoped to see some truly native wildlife, and so we pressed on under a brilliantly blue sky. 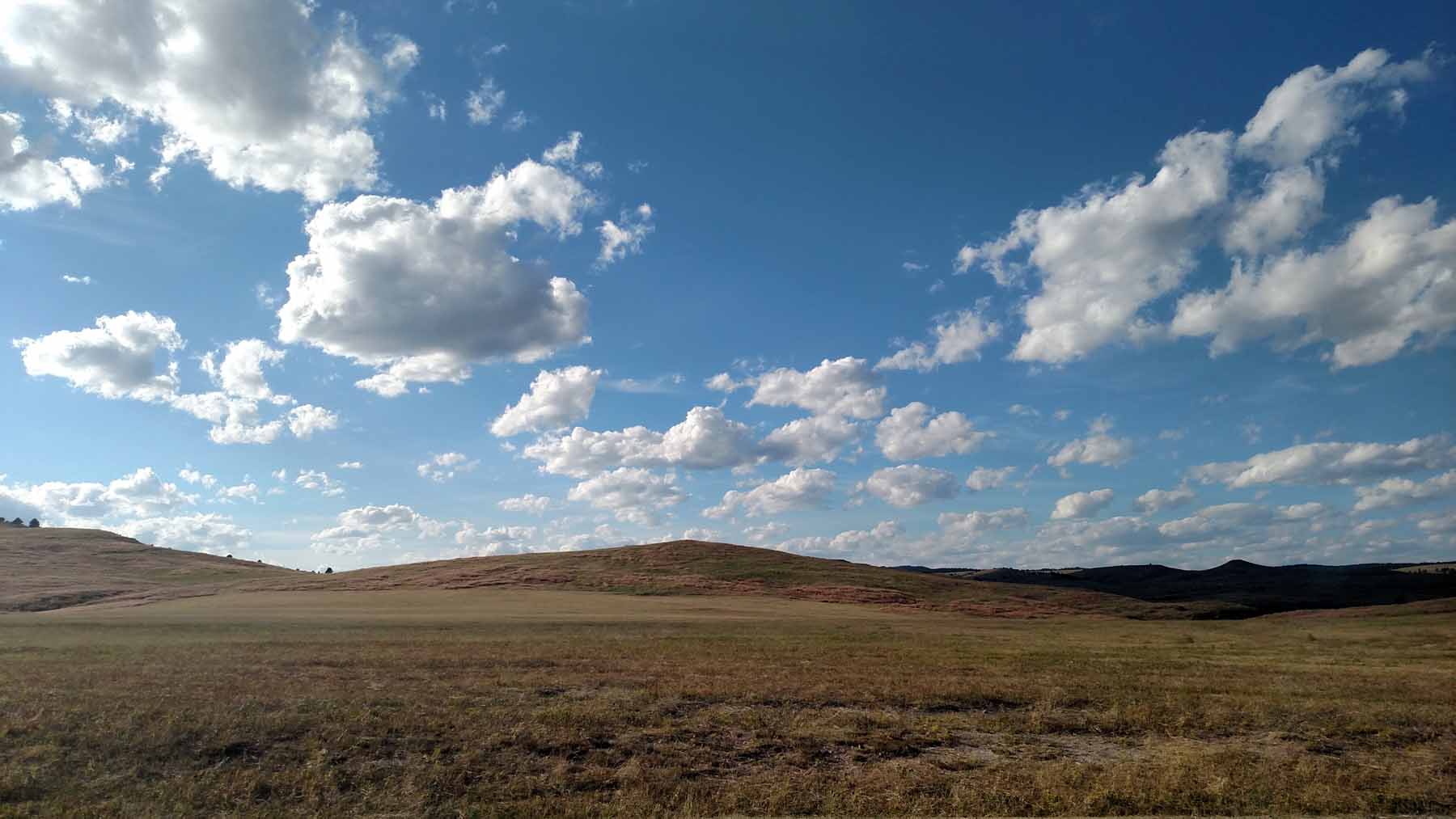 Not long after we abandoned the beggars, we spied some pronghorn does roughly 100 feet from the road. They were mostly unconcerned with us, though clearly alert to our presence.

They’re really quite lovely animals, often referred to as antelope because they resemble the African antelope, though they are actually more closely related to the giraffe, believe it or not.  A few photographers were lined up to get pictures of them, so we pressed onward, and caught our first glimpse of bison/buffalo!

The herd was steadily moving away from us, so we watched them saunter over the hill in a group. They’re large animals, but from afar it’s hard to get a feel for how big they really are. They can reach up to 6 feet in height, and weigh more than a ton. They are mighty creatures and I knew that this was only a fraction of the population of Custer State Park. There is up to 1,450 head of Bison in the park, so as they made their way into the distance we started along the road again, knowing that we might see more.

We hadn’t gone but a mile when I spotted a male pronghorn lying prone in the grass.

Like the does we had seen before, the buck took notice of us, but remained apathetic. While these are wild animals, they’re used to seeing vehicles and people on a daily basis. They’re certainly not tame, but they are accustomed to humanity’s presence. While it’s great that we have the opportunity to witness these animals in their habitats, it’s also important to remember that we do have an effect upon them, and must be good stewards of the land and the fauna. I may have imagined it, but I felt that he and I locked eyes for a moment, two animals paying respect as we passed each other by.

I experienced such glee driving onward from my eye contact with the pronghorn buck, that I was completely shocked upon rounding a curve only to discover that we caught in an unexpected traffic jam. 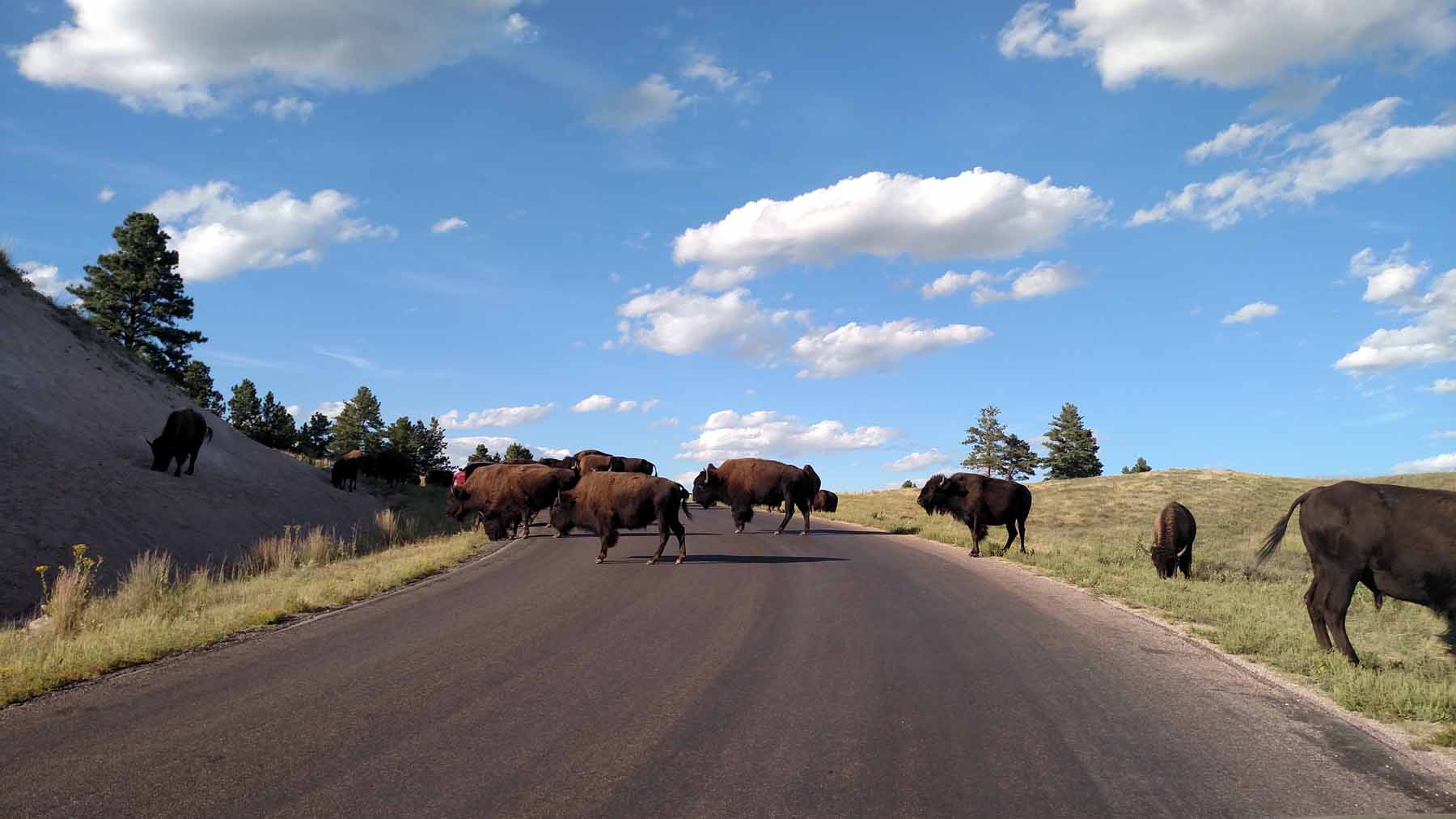 Remember when I said before that it can be difficult to imagine the actual size and scale of a buffalo from a distance? That was no longer a worry, as they surrounded the Sportage on all sides.

To be clear, this was neither aggressive, nor antagonist; we were just passing through where they happened to be standing, and they clearly had the right of way. That being said, when a 2000 lbs buffalo bull is mere feet from your open window, and a cow (female bison) decides to scratch her butt on the bumper of your car, moving it back and forth with great ease, well it’s easy to get a little intimidated!

We had a nice long sit among the bison; if a herd of bison doesn’t want to move, I don’t plan to agitate them. Not everyone has the patience that I do, however, and I can’t blame them. While the Wildlife Loop is an attraction to visit for most of us, some people actually need to take that road to get home! As majestic as a herd of buffalo is to me, I’m sure if they were holding up my return home from a particularly stressful day of work I might be a little testy. After about a half an hour, a ranger came along and used a bullhorn to send them on their way. They didn’t rush away frightened, they calmly sauntered away from the noise because it suited them, and soon we were on our way again.

We crossed tracks with another group of pronghorn as we neared the end of the Wildlife Loop. This group was a little less hesitant to approach the road as they chewed on the grass and strutted around. All does in this group, or perhaps young males. I was happy that I got to see the buck previously, but it was also wonderful to see this group a little closer, especially after our incredibly close encounter with the buffalo!

As we exited the park and sped towards Rapid City, I found myself thinking about our interactions with these animals and the effect that we have had on them. I’m so grateful for the opportunity to see them so closely in the wild, yet I know that these interactions are not necessarily indicative of what I would experience in the back country.

I have great respect for animals, large and small, and it is my sincere hope that attractions like the Wildlife Loop will help others to feel similarly. For me, it was an exciting experience, an opportunity to see some animals I had never seen in the wild before, and just a great drive through some beautiful scenery with my new wife. After all, this was our honeymoon, and we were happy to be making the most of it spending as much time as possible outside in the sunlight.

And I think we did pretty well.

We’re nearing the end of the Honeymoon adventures, so keep your eye peeled for the next installment, which will be coming soon!

Today is a crazy busy day. Getting a bit stressed. Looking forward to the end of the day beer when I get home.

Because I'm not actually an action hero, I'm a real like human, and the human operating system is still hella buggy.

All I can do, is summon up every fiber of my being and use it to scream at my own brain to grab the to-do list and Just. Do. One. Thing.

I'm experiencing a lot of overwhelm today. Paralysis when I look at the to do list... I absolutely wish I was cool and smooth and always confident and certain, like an action movie hero. Alas, I am not.

My check engine light is on. Not my truck's light. Mine.