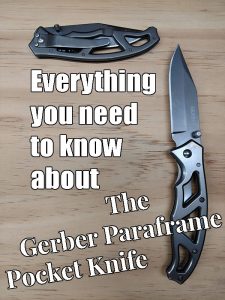 I love my Swiss Army Knife. I love it so much that when I thought I had lost it, I made a video mourning its loss. So yeah, I love my SAK. It has saved my ass countless times, but I’ll admit that it does have its flaws. While I love having a number of useful tools in my pocket, I recently decided to add a new knife to my daily carry.

My needs? A locking blade, a clip for easy pocket access, and one-handed opening. When I set about looking, the Gerber Paraframe wasn’t even on my radar. When I started unpacking boxes in the basement I ended up coming across an old one that I must have bought sometime when I was an undergrad. So I sharpened it up, stuck it in my pocket and started carrying it.

Overall I liked it well enough, but the serrated blade just annoyed me to no end. So I went back to searching, and ended up finding the exact same knife for sale on Amazon, sans serrations. It was $15 at the time, so I placed an order.

If you’re in the market for an inexpensive pocketknife and think this might be a good deal, here’s everything you need to know.

The entire Gerber Paraframe series focuses on a minimalist open frame design. This works out to make a pretty lightweight knife that’s easy to open, clean, unlock and close. Into lists and details? here you go.

Now some of those specs make sense right out of the gate. The blade length is three inches — that’s pretty standard for a pocketknife. It’s fairly light and the handle is made of stainless steel. When we get to blade material though, we run into high carbon stainless steel. So what does that mean?

Gerber doesn’t appear to advertise the steel used in the blade, but resources online indicate that it;s 7cr17, which is similar to 440A. It’s not the greatest steel around, but you’ll find it used in a lot of knives made in China — incidentally, Gerber manufactures the Paraframe I in China. I would consider this steel a deal breaker in a more expensive knife, but for an inexpensive every day carry pocketknife, I was open to see how it stood up to my abuse.

Overall, the knife feels sturdy but light. The Paraframe design isn’t the most ergonomic, but I don’t find it uncomfortable to use. The clip keeps it in place well enough for me to pull it from my pocket without any issue, and I can open it smoothly with one hand.

The frame lock hasn’t failed, and the blade has almost no play in it when I try to wiggle or twist it. I pulled out the old serrated blade Paraframe and check the lock and play on its blade as well. It had a slight amount of play in it, but not enough that I would worry about for every day use.

It seems like a lot of people either love Gerber or hate them. I don’t have a dog in the fight, but I’ll admit that I tend a little more toward the love side of things. A Gerber Compact Sport 400 multitool that I got as a high school graduation present served me very well on a number of trips and projects before getting replaced with my Swiss Army Knife. I keep a Shard on my key chain and a Suspension Multitool in the console of the Ranger. I’m not a Gerber fanboy, but obviously I’ve gotten pretty good use out of their products.

But I do understand some of the “Gerber Hate.” Fiskars acquired the company in 1987, and older knife aficionados will tell you that the company started going downhill not long after. I can’t speak to that (I was four at the time of the acquisition), but I see a lot of the company’s products catering to a specific market in the last decade — the survival television market.

I’m not judging anyone who likes survival TV. I enjoy it from time to time myself. But Gerber leaned into the genre pretty heavily with tools and knives promoted and partly designed by Bear Grylls. In general, I feel like much of the “tacticool” features don’t offer much in usability — like the aforementioned serrated edges. Grylls himself has been on the receiving end of criticism (and sarcastic memes) and while I’m more sympathetic to him than some, I still have little interest in black and orange Bear Grylls branded “survival” knives and gear.

So Does Gerber Make a Bad Knife?

Sometimes. But not always.

After all, you can go to a gas station and buy a folding knife for $2. I guarantee that’s a bad knife. While Gerber tries to snag the big box store shoppers who want to play survivalist on the weekends, I think the company is still making some solid products, including folders like the Paraframe.

You can find much better knives — but probably not at the Paraframe’s price point. And that’s okay. It’s like the difference between a filet mignon at a five star restaurant and a good burger on your buddy’s old backyard grill. The filet is undoubtedly the better cut of meat prepared to more exacting standards, but sometime all you need is a burger.

The Paraframe is like a good burger at a friend’s house on the weekend. Preferably served with a Miller High Life.

How the Gerber Paraframe Holds an Edge

I found the blade reasonably sharp straight out of the package. That said, I knew a quick trip to the whetstone would get it right where I wanted it. A quick sharpen and stropping, and I popped it in my pocket. Then I went about abusing it.

Everyone tells me not to open packages with my pocketknives since it dulls them quickly. Plus the packaging tape gets adhesive all over the blade which attracts dirt and grime, which in turn attracts moisture. So I opened every package we got with it. I cut steak with it, cleared bark from limbs, and used it for every conceivable chore I came across.

Still decently sharp. I wouldn’t want to perform surgery with it, or try to do any precision craft work, but it still held up to open more boxes, cut meat and veggies, and perform general knife tasks. It didn’t hold an edge as long as my Swiss Army Knife or even my Mora, but it did keep a reasonable edge on it.

Reasonable, but not great. It was usable, but the once the dullness set it, it quickly grew more and more noticeable. Under heavy use, you can probably expect biweekly sharpening maintenance.

Remember that 7cr17 steel that Gerber used to make the Paraframe’s blade? It has a reputation for being a pain in the ass to sharpen. And it kind of is. Plus, Gerber adds a titanium nitride coating — which is supposed to resist corrosion but really just gives you something to wear off when you’re trying to sharpen the damn thing. I’ve had worse times trying to sharpen a blade, but it was still a chore — just be patient and don’t rush it.

If the Paraframe is going to be your EDC blade of choice for general knife work like opening boxes, trimming wood, or other assorted tasks, I’d recommend sharpening it regularly — keeping a decent working edge is a lot easier than trying to put one back on, and that’s especially true of the Paraframe.

That said, since I’m still carrying my SAK in my pocket alongside this knife, and I carry my Mora anytime I’m out in the field, I don’t feel the need to keep the Paraframe razor sharp. I absolutely want it sharp enough to perform its tasks but I’m not shaving with it, so I see no sense in spending hours to get it sharp enough to separate hair from my chin.

Here’s the Pros and Cons

Since some people like to cut to the chase and skip my burger analogies, here’s the pros and cons of the Gerber Paraframe.

The Gerber Paraframe: My Final Word

At the end of the day, I’m glad that I’ve got the Gerber Paraframe clipped to my pocket, but it doesn’t complete my quest for an EDC folder. It’s a reasonably priced knife that does everything I need it to reasonably well. If you have a tight budget, this is a good tool to have. The Paraframe is high enough quality that you can count on it when you need to, so long as you put in the effort to keep it sharp and clean.

If you have more to spend, I’d step up to something of higher quality, like the Spyderco Delica. It will do everything the Paraframe will, but will perform better, hold an edge longer, sharpen more easily, and feel more comfortable in your hand. But if you’re like me and don’t have $80 to spend on a knife right now, I recommend snagging the Gerber Paraframe and using it while you pinch pennies until you can upgrade.

The Gerber Paraframe is a decent inexpensive folding knife for everyday tasks, but if you plan to use your knife a lot you will want to upgrade eventually .

2 thoughts on “The Gerber Paraframe: An Inexpensive Pocket Knife for EDC”