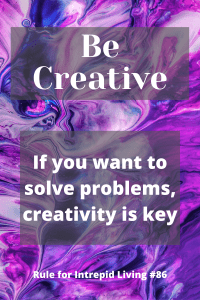 Often when we talk about creativity we focus on the arts. That isn’t necessarily a bad thing — I love art, and who among us hasn’t found ourselves moved by a song, movie, or book?  But creativity isn’t reserved for artists. Though we may not often think about it, being creative is a helpful factor in pretty much any role you may find yourself in. Creativity plays a significant role in problem-solving, whether that’s erecting a shelter, improvising a repair when you don’t have traditional tools or materials handy, or even just figuring out what to make for dinner when you haven’t gone grocery shopping yet. When I say be creative, I’m not just talking about the arts — though I love them — I’m saying think about how you can use what you’ve got to do something great.

I love the TV show MacGyver from the 80s. The titular hero was able to solve just about any problem he encountered using wits, knowledge, whatever tools and materials were handy, and his own creativity. 2016 saw the show rebooted, but it just doesn’t have the same magic as the original for me.

There was something about watching Richard Dean Anderson as Mac piece together the idea of how to save the day, whether through chemistry, engineering, auto-mechanics, or some other sort of improvisational magic.

You probably wouldn’t call MacGyver an artist, even though he did take a painting class in one episode. Yet I consider him perhaps the best fictional embodiment of be creative. He used his imagination, and what he had on hand to make awesome things. We should all try to be more like that.

But what if I’m not creative?

The first thing you need to do is stop saying things like, “I’m not creative.” All statements like that are a bit of a self-fulfilling prophecy. You say that you’re you’re not good at something, so you don’t bother getting better at it. Boom, your statement is true. So it is with creativity.

Even if you don’t realize it, you probably ARE quite creative. It just might not be in traditional manner in which we tend to regard creativity. I have friends who create masterpieces in the kitchen, build trucks from the frame up, and code incredibly useful programs. And while they think they aren’t creative, nothing could be further from the truth.

Anytime you engage your mind, your imagination, and even your logic to solve a problem or to make something, you are exercising creativity. It doesn’t matter if you’re just trying to figure out how to get a rusted bolt off of your truck or get a fire lit in rainy weather. That’s what creativity is — using your brain to come up with solutions.

How to be more creative 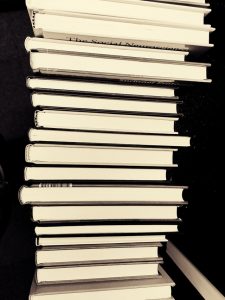 The second is to seek out content. Read more, listen to podcasts and audiobooks, visit galleries or look at art online. Expose yourself to as much information in all forms as possible. Even watching movies and TV shows can prove beneficial — provided you don’t overdo it. Watch sports, read comics, browse recipes online.

Take in as much information as possible.

And it doesn’t all have to be useful right away. We already know that insight and wisdom can come from unexpected places, so don’t limit yourself.

Why are we doing this? Because creative problem solving is seldom an entirely new idea. It’s a remix, a mashup, an amalgamation of different things you’ve learned put together in a different way. That’s what happened when I ended up using a pipe wrench to free rusty bolts on the Ranger’s shocks. It’s what MacGyver did when he improvised lock picks, traps, airplanes, arc welders, and explosives.

It’s what we all do when we solve problems. Be creative and put a bunch of different pieces together to see what works.

Even this Rule is a mashup, owing much to Kirby Ferguson’s Everything is a Remix series.

And the more content that we have, the more material we have to draw on when we’re trying to be creative. Hence the ingestion of so much material of so many different kinds — both real and fictional.

Taking in content provides the materials you need for creativity. Now you just need to practice. There are a number of ways to do this, but basically they all come down to making solutions. Whether you’re trying to solve problems at work, trying to fix something in your house, or even just trying to come up with something fun to do this weekend, look at it as an opportunity to practice creativity. Put your beautiful brain to work trying to find a new and better way to do something.

Of course, it’s entirely possible that you’ll fail — that’s okay. You don’t have to implement your creative solution. You just need to think about it. And you need to allow yourself to entertain ideas that seem silly. Worrying about whether something is silly or embarrassing is limiting. It will only keep you from your creative potential. So scrap that thinking. Be weird.

Last but not least, don’t be afraid to dive into the arts in one form or another. Creativity in one area of your life will often help you be more creative in another area. Take an art class, or try an open mic night. Open up Google Docs and start writing a short story. You don’t need to go pro, just have fun. Stretch. Explore. Experiment.